Video games for people with limitations

Xbox adapter 100% compatible with the IntegraMouse+, which can be connected as a joystick. 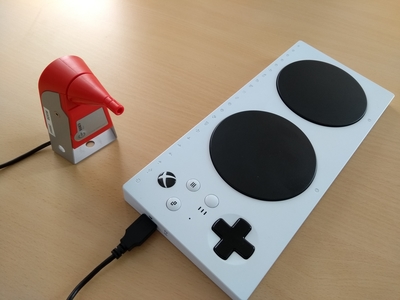 It is estimated that 2.6 billion people worldwide play video games, ranging from simple mobile games on smartphones to complex games on consoles and PCs. The variety of games is huge, from young to old, there is a game for everyone.

However, as in many other areas, people with disabilities experience a variety of barriers and are often excluded from video gaming. Yet the digital world in particular offers opportunities to overcome limitations and experience things that are not possible in reality.

It is therefore all the more gratifying that Microsoft has recognized this important target group and launched the Xbox Adaptive Controller for gamers with limitations in 2018. The device basically consists of two big buttons, a control pad and a lot of connectors. Thus, a multitude of additional buttons can be connected, as well as two joysticks. With the help of an app the whole system can also be configured extensively.

This allows gamers with limitations to create an individually tuned input system on PC or Xbox to finally play their favorite games.

Tested by LIFEtool experts and found to be very good!

"We have already looked at and tested the Xbox adapter at LIFEtool and are convinced that many gamers with limitations will enjoy it. We are also happy to announce that the adapter is 100% compatible with the IntegraMouse+, which can be connected as a joystick", reports LIFEtool developer Michael Gstöttenbauer.

Interested parties can get more information and advice about the Xbox Adaptive Controller, IntegraMouse+ and gaming for people with disabilities at the LIFEtool Linz advice centre.