Ljiljana Cakmak: "I cannot imagine a life without IntegraMouse anymore." 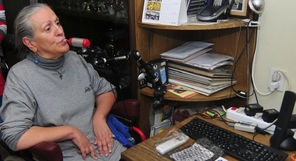 12 years ago, a very significant thing happened to Ljiljana Cakmak – and it changed her life for good. „I got a personal computer and an IntegraMouse USB. This meant a giant ‚7-mile leap‘ for me and it opened a whole other world of possibilities. In an instant, I was more independent as I was able to do much, much more than before that moment. Things like keeping in touch with family and friends and working suddenly became much easier. Today, I cannot imagine my life without this dear, little, but BIG gadget."

Ljiljana Cakmak lives in Novi Sad in Serbia. Today she is 62 years old: when she became ill, she was 26. From then on her whole body was paralyzed. Ljiljana felt cut off from life – from her life as a hydraulic engineer and her life as culturally interested and active person. She was no longer able to use her computer. Today she is operating her computer with IntegraMouse USB, which was introduced to her at the Resource Center for people with disabilities in Novi Sad. The slightest movement of her lips controls the mouthpiece and moves the mouse across the computer screen. By simply sipping and puffing, she can trigger mouse clicks as with any standard mouse. Ljiljana uses the first generation IntegraMouse as do around 2.000 other people in a similar living situation.

When Windows 8.1 entered the market, suddenly 2.000 IntegraMouse USB users found that their devices no longer worked because they were not compatible with USB 3.0. While the next generation, IntegraMouse Plus, already had USB 3.0 integrated, some 2.000 users worldwide still wanted  to use their original IntgegraMouse USB.

As a matter of fact many new devices are only delivered with USB 3.0. So users were legitimately concerned that their IntegraMouse USB devices would no longer work. Internal developers were not able to solve the software problem. So they asked for support at Microsoft.

Thanks to great teamwork of Microsoft Austria and one of its partners, SecureGUARD in Linz, the problem was identified and solved. SecureGUARD got all the information necessary in order to provide users with an update-script. This update can be applied either or after updating Windows 8.1. Ljiljiana was the first user who benefited from the update-script.

For IntegraMouse USB under Windows 8.1 please use this driver file and follow the steps: