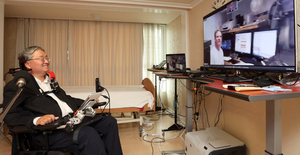 Sang-Mook Lee is an Associate Professor at the School of Earth and Environmental Sciences, Seoul National University, the foremost academic institute in Korea where he is specialized in Marine Geology and Geophysics.

His main interest is in plate tectonics, in particular, underwater geodynamic processes along plate boundaries including those at mid-ocean ridges, subduction zones and marginal basins with the aid of the state-of-the-art instruments and research vessels.

On July 2 2006, during a geologic field trip with students in California dessert, Sang-Mook was critically injured in a van rollover accident which made him quadriplegic. The injury on cervical spine number four completely paralyzed him below his neck and shoulder. Nobody thought he would return. However, in less than six months, he came out of the hospital and returned back to the university in a electric wheelchair.

Sang-Mook’s main passion is still in scientific research and education. At Seoul National University, he established an undergraduate interdisciplinary program in computational sciences as part of universal design in higher education and is starting a new initiative for open online education. He is also the main force behind the movement to establish a graduate program in rehabilitation science and engineering. In addition to manage his time among teaching, conducting research in earth science and running big national program, Sang-Mook makes many public speeches on diverse topics around the world including earth science, disability and assistive technology. His story was featured in the New York Times, NOVA and PBS.

Back at work: also thanks to IntegraMouse Plus

His incredible comeback was later noticed and reported nationwide by the media, which made him a celebrity overnight. The media still follows him to this day. The fame brought power to him in order to change things in Korea and rendered him as an opinion leader in Korean society. The public recognition also brought a lot of responsibility. He sat on many top-level government committees including the Presidential Council for Information Society (2009-2013). Currently, he serves in the Disability Policy Coordination Council under the Prime Minister, Sustainable Development Committee for Metropolitan Seoul, and the advisory board of Seoul Metropolitan Office of Education, just to name a few. In short, he is hailed as an exemplary model of a person who overcame severe disability by taking advantage of modern technology. Since 2010, Sang-Mook is leading the Quality of Life Technology Program in Korea, a bold multimillion-dollar initiative by the Ministry of Trade, Industry and Energy to develop assistive technology and provide high-level education for people with disability.

In 2011 LIFEtool's CEO David Hofer joined a delegation with politicians, entrepreneurs and journalists from Upper Austria on their trip to Seoul. There he met Prof. Sang-Mook Lee and presented the first IntegraMouse Plus (with serial number #2). IntegraMouse Plus is an important tool for Prof. Lee. He uses it for his work on computer and internet and uses it also to operate other tools with it.

In the same year Prof. Lee came to Austria and inspired people at "Wissens-forum" in Graz and at Kepler-Society in Linz. He puts himself a very lucky man. Though he no longer is able to do science cruises on his own he still participates thanks to modern technology. He is with his friends and with his eyes a-twinkle: "all without getting sea sick at all!"

Learn more about Prof. Lee and his passion for science and how science helped him getting back at work after his accident.

Prof Lee on his visiting tour in Austria: many inspirings moments

» Head of the page